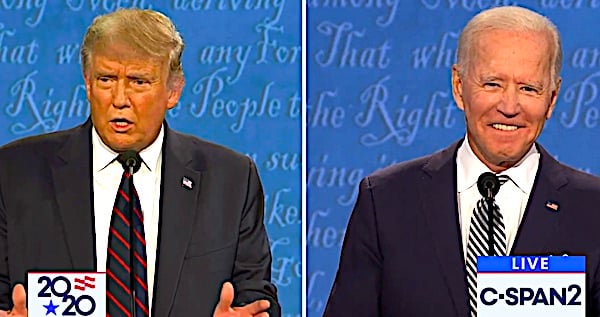 A new poll reveals that support in recent weeks – amid his latest scandal of having classified government documents stored improperly at an office and at his home – for Joe Biden has "rebounded" among independents, college graduates and women voters.

That's even as his approval remains underwater and a full 42% of Democratic primary or caucus voters think someone else should be the party's candidate in 2024.

But the Emerson College Polling results delivered some devastating news to the Dems:

"Despite improving job approval, President Biden trails former President Trump in a hypothetical 2024 presidential match-up, 41% to 44%. Ten percent would support someone else and 4% are undecided. Since the November national poll, Trump’s support has increased by three percentage points, from 41% to 44% and Biden’s support has decreased by four percentage points, from 45% to 41%," the poll results explained.

Columnist Paul Bedard at the Washington Examiner pointed that flip.

"Biden is also barely treading water against Florida Republican Gov. Ron DeSantis, the only other potential Republican candidate with enough support to win the Republican presidential nomination. The survey found that Biden leads the newly reelected governor 'by less than a percentage point, 40% to 39%,'" he documented.

Bedard reported, "Politically, Biden has seen the document scandal chip away at his support, and Trump has shifted from a heavy focus on the 2020 loss to talking about answers to major 2024 issues including immigration."

Biden's approval rating still is underwater, with 44% approving and 48% disapproving, but that was slightly better, by a few points, than earlier, the poll said.

Bedard reported, "Trump has maintained his 55% support in the GOP primary, while DeSantis has increased his share by nine points from 20% to 29%. Every other potential candidate is in single digits, including former Vice President Mike Pence at 6% and former United Nations Ambassador Nikki Haley at 3%."

The poll said, "The economy remains the top issue for the plurality of U.S. voters (43%), followed by healthcare (13%), immigration (11%), 'threats to democracy' (10%), and crime (7%). Since November, the share of voters who identify the economy as the top issue facing the U.S. has decreased by three percentage points, from 46% to 43%, whereas healthcare increased by seven percentage points, from 6% to 13%."

Under Biden's leadership, inflation across the United States has exploded, reaching more than 9% at one point and gasoline prices are surging – they're up 82 cents a gallon in one state in just the last four weeks, all of which hits consumers extremely hard.

Further, Biden's programs are offering a threat to those families' retirement savings, too, because of the possibility funds could start allocating resources based on "environmental" and "social" issues.

Additionally, Biden's agenda has focused mainly on transgenderism and abortion, and the southern border has been left wide open for millions of illegal aliens to enter.