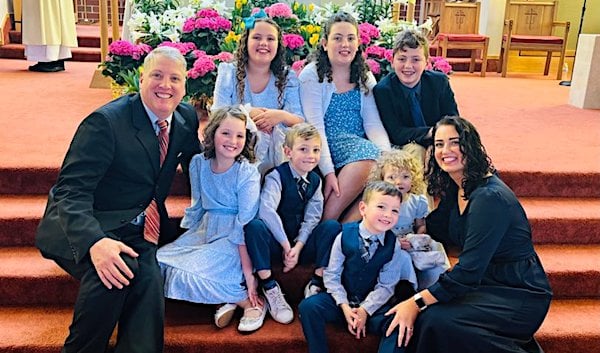 Mark Houck and family. (Courtesy of the Houck Family)

Joe Biden's extreme pro-abortion ideology is probably captured better nowhere else than in the government's case against Mark Houck, a pro-life father of seven who was arrested in a stunningly violent pre-dawn FBI raid on his home.

His alleged offense? Pushing back against an abortion business "escort" who had badgered and harassed his son.

But now Houck's defense counsel, from the famed Thomas More Society, have dropped a bombshell on the prosecution.

They've introduced evidence, during a pretrial hearing, and Congress never intended for the federal FACE Act to protect "escorts." In fact, they are specifically excluded.

The so-called Freedom of Access to Clinic Entrances Act was adopted after an amendment that was the subject of a public exchange between Sen. Ted Kennedy, D-Mass., and Sen. David Durenberger, R-Minn.

The two negotiated the amendment "to strip clinic escorts of the right to bring lawsuits under the FACE Act."

Durenberger said, in Congress, "By defining 'aggrieved person' in this way, was it your intention to exclude clinic escorts or so-called clinic defenders?"

Kennedy responded, "That is correct. Demonstrators, clinic defenders, escorts, and other persons not involved in obtaining or providing services in the facility may not bring such a cause of action."

Durenberger continued, "The bill, as currently drafted before us, allows legal relief only to clinic patients and personnel. And this is the critical, if you will – not the only, but the critical - change that has been agreed to by the proponents of this legislation and by the senator from Massachusetts. We have recognized that federal law should be extended narrowly to protect only those who were actually attempting to obtain or provide medical or counseling services. It does not protect the escorts."

Thomas More Society lawyers filed, during the hearing this week, their Objections to Government's Jury Instructions in response to Biden's demand that any such "volunteer escort" is "protected."

The Biden Department of Justice contends that the volunteer abortion escort involved in the fracas, Bruce Love, legally is a "provider of reproductive health services."

The defense charges that Congress "expressly intended to exclude so-called 'escorts' operating outside of abortion facilities from being encompassed by the FACE Act."

"The FACE Act was never intended to cover disputes between advocates on the public sidewalks outside of our nation’s abortion clinics," explained Thomas More Society Executive Vice President Peter Breen, who is representing Houck. "This new evidence shows clearly that Congress intended to limit the FACE Act to patients and staff working in the clinic, and not to take sides between pro-life and pro-choice counselors and escorts on the sidewalk.

"The Biden Department of Justice’s prosecution of Mark Houck is pure harassment, meant solely to intimidate our nation’s pro-life sidewalk counselors who provide vital resources to help pregnant women at risk for abortion."

Thomas More Society attorneys have provided alternate jury instructions, arguing that the clear language of the FACE Act requires that the reproductive health services must be provided "in a…facility," which excludes escorts – a view reinforced by the clear statements supplied by the Congressional record.

Houck's jury trial is scheduled for January 24 before District Judge Gerald J. Pappert in the United States District Court for the Eastern District of Pennsylvania.

That federal government's attack on Houck, and other pro-life advocates who have been caught up in alleged FACE Act violations, comes at a time when, following the Dobbs Supreme Court opinion overturning Roe, dozens of pro-life centers and faith organizations have been attacked, threatened and vandalized by pro-abortion forces.

Biden's DOJ has failed, so far, to make any arrests in that wave of crime.

WND earlier carried the report that Republicans Reps. Jim Jordan of Ohio and Mike Johnson of Louisiana, who now are part of the House majority, launched a congressional inquiry into the Justice Department’s "political enforcement" of the FACE Act.

“Several recent actions by the Department reinforce the conclusion that the Justice Department is using its federal law enforcement authority as a weapon against the administration’s political opponents,” the Republican congressmen said in a letter to both Jacqueline Romero, the U.S. attorney for the Eastern District of Pennsylvania, and Attorney General Merrick Garland. “Since the unprecedented leak of a draft Supreme Court opinion in Dobbs v. Jackson Women’s Health Organization, the Justice Department has politicized enforcement of the Freedom of Access to Clinic Entrances (FACE) Act."

Houck was targeted when it was alleged he was involved in pushing a pro-abortion activist who allegedly harassed his son.

“The Department’s decision to arrest Houck, as well as the tactics used to effectuate the arrest, are troubling,” the letter said, noting that Houck’s wife recounted how FBI “had about five guns pointed at my husband, myself and basically at my kids,” and emphasizing that Houck’s attorney “subsequently disclosed that the dawn raid was unnecessary because Houck had offered to appear voluntarily and the FBI targeted Houck ‘solely to intimidate people of faith and pro-life Americans.’”