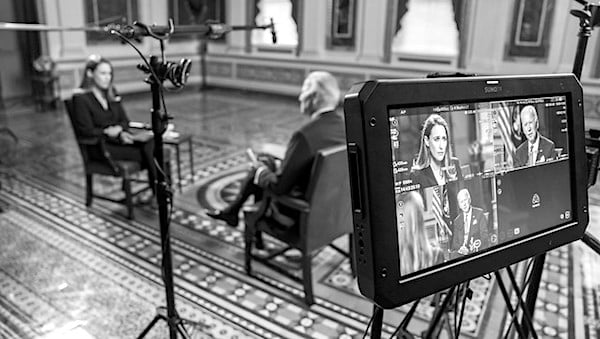 The hosts on liberal media networks had lots of opinions during 2022, from comparing the fight for gun control to the abolition of slavery to accusing the Founders of “crimes against democracy.” The Daily Caller News Foundation has noted six times where their hot takes went above and beyond.

“Lincoln was an incrementalist because his enemies were absolutists in their support of slavery,” Scarborough said. “So today, take a deep breath. Those seeking meaningful public safety reform find themselves surrounded by gun manufacturers and their allies who are trying to block laws that Americans support and laws that could slow down and eventually stop mass killings in our schools.”

2. Chris Cuomo Asked If OPEC Slashed Production As Part Of A ‘Deal’ With Trump

NewsNation hired Chris Cuomo after Cuomo was fired from CNN. On Oct. 7, during the first week after his show premiered, he questioned if OPEC cut a “deal” with Donald Trump to lower oil production.

“Why is OPEC doing this now? They haven’t done this since May of 2020, when they correctly thought that the demand would be going down due to the pandemic, and they were right. So, is it to help Trump? Is it part of a deal to lend money to his family?” Cuomo, the brother of former Democratic Gov. Andrew Cuomo of New York, asked.

Tiffany Cross took aim at many women and minority candidates running as Republicans during the 2022 midterm elections on Oct. 22.

“Faces of color do not always equate to voices of color,” Cross said. “As our own NBC’s Scott Wong points out in his good reporting, the leadership will almost be entirely composed of white men. Really, this sounds more like the political equivalent of ‘some of my best friends are black.’”

Cross routinely expressed hostility towards conservatives on her Saturday morning MSNBC show, going so far as to say that “civil war” was taking place on Aug. 18, while guest-hosting “The ReidOut.”

“You have millions of people turning into a propaganda network every night,” Cross said. “As if that were not bad enough, that’s an extremist network itself, you have these fringe pop-up outlets from OANN to Newsmax. Then you have the social media component. The train has left the station. There is no dealing with the rhetoric. At this point, we need serious conversations around preparing for actual violence. People keep saying a Civil War is coming. I would say the Civil War is here.”

5. Don Lemon Looked Straight Into The Camera And Said: ‘There’s Nothing Fake About CNN’

CNN anchor Don Lemon told a guest on Dec. 19 that “There’s nothing fake about CNN.” However, multiple hosts and guests on the network pushed the now-discredited Steele Dossier, a document funded by the Clinton campaign and Democratic National Committee that claimed Donald Trump colluded with Russia during the 2016 campaign.

The network also claimed that riots in Wisconsin during the summer of 2020 were “fiery but mostly peaceful” in a chyron, and edited a video to make it appear that then-President Donald Trump dumped a box of fish food into a pond of koi that omitted then-Japanese Prime Minister Shinzo Abe doing the same thing.

MSNBC host Lawrence O’Donnell took aim at the men who wrote the Constitution, declaring them guilty of “crimes against democracy” during his July 7 show, as he heralded the virtues of the United Kingdom’s parliamentary system over the republican form of government in the United States.