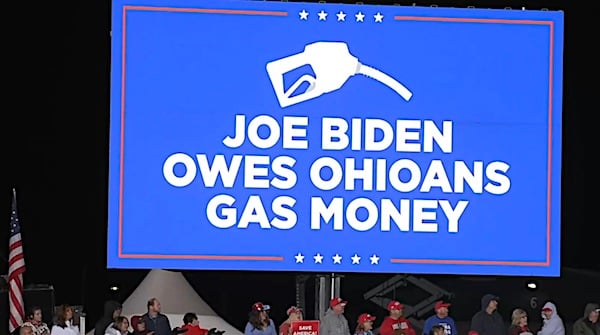 Secretary of Energy Jennifer Granholm claimed Monday that “international and climate events” were to blame for price increases at the pump.

“It’s obviously based upon international and climate events, so, for example, Winter Storm Elliot pulled two million barrels off the U.S. market,” Granholm said during a White House press briefing. “That crimp in supply causes prices to go up.”

Biden and the White House have often called increased gas prices the “Putin price hike,” but some experts have said Biden’s hostility to fossil fuel production has fueled higher gas prices. The Biden administration revoked the permit for the Keystone XL pipeline in January 2021 and canceled an offshore lease sale in May after issuing new regulations for onshore drilling for oil and natural gas.

Biden authorized the sale of up to 180 million barrels of oil from the Strategic Petroleum Reserve (SPR) in March, following Russia’s Feb. 24 invasion of Ukraine. The reserve is down to its lowest level since the 1980s, Forbes reported.

Democratic Gov. Kathy Hochul proposed a ban on new appliances using natural gas, primarily stoves, furnaces and water heaters that would take effect in 2030 during a Jan. 10 speech, Bloomberg reported. The Biden administration reportedly is also considering a ban on gas stoves and other appliances.