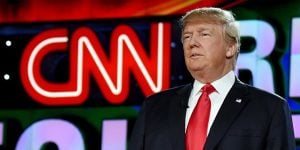 President Trump's 2020 re-election campaign is vowing to sue CNN in response to the revelations this week published by Project Veritas that the network's negative coverage of the president is motivated by CEO Jeff Zucker's "personal vendetta" as well as the strong political bias of employees.

Trump attorney Charles J. Harder wrote in a letter to CNN, Zucker, and Executive Vice President David Vigilante that the network's years of anti-Trump coverage break its promise of "excellence in journalism," the Washington Examiner reported.

The letter cited hidden-camera recordings of former CNN contractor Cary Poarch capturing the comments of employees, including Zucker telling his leadership "impeachment above all else."

Harder, who represents both Trump and the Trump campaign, said such examples "are merely the tip of the iceberg of the evidence my clients have accumulated over recent years."

"Never in the history of this country has a President been the subject of such a sustained barrage of unfair, unfounded, unethical and unlawful attacks by so-called 'mainstream' news, as the current situation," he wrote.

The Examiner cited CNN spokesman Matt Dornic saying, "This is nothing more than a desperate PR stunt and doesn't merit a response."

Harder argued that while media is typically protected by the First Amendment, CNN's bias violates the Lanham Act "by constituting misrepresentations to the public, to your advertisers, and to others" to distribute "truly fair and balanced" news.

"Accordingly, my clients intend to file legal action against you, to seek compensatory damages, treble damages, punitive damages, injunctive relief, reimbursement of legal costs, and all other available legal and equitable remedies, to the maximum extent permitted by law," he wrote.

Harder said the three videos Project Veritas released one at a time this week show "your reporting relating to President Trump is contrary to your own mission and the aforementioned Code of Ethics."

"Your own employees appear to state that CNN is focused on trying to 'take down President Trump,' driven by a 'personal vendetta' that Mr. Zucker purportedly has against him, rather than reporting the news in an objective manner," wrote Harder.

On Wednesday, employees admitted the network favored Sen. Elizabeth Warren of Massachusetts over the other 2020 Democratic presidential candidates.

On Thursday, a third video featured a death wish for President Trump and an admission that the network has sold itself to the devil.