In July of 2019, a hearing committee of the District of Columbia Bar Board of Professional Responsibility made a recommendation that Judicial Watch founder Larry Klayman be suspended, a recommendation now under appeal, from the practice of law in the district for 33 months.

The three-person committee strangely and inexplicably included only two attorneys, both of whom are of the left, and one of whom, Michael Tigar, is proudly far left.

How far left? Consider the following review on the jacket of Tigar's most recent book: "'An incisive, unsparing, creative, brilliant critique of capitalist law and its dire human consequences.' – BERNARDINE DOHRN, co-editor with Bill Ayers, Race Discourse: Against White Supremacy."

In the book, "Mythologies of State and Monopoly Power," Tigar emphasizes the Marxist notion that "the law is not what is says but what it does." Not liking the "dire human consequences" of the law as it exists, Tigar is not above twisting the law to his own ends.

Klayman suspects that Tigar, something of a superstar in Marxist circles, was recruited by the committee chairman, Anthony Fitch to sit on the committee with him. The two appeared chummy throughout the proceeding, and Fitch seemed downright deferential.

Throughout the proceeding, Tigar could barely conceal his disdain for the conservative, pro-capitalist, pro-Israel, pro-Trump activist Klayman.

In testifying as to why he founded Judicial Watch, Klayman explained his objections to the fact that federal judges were often chosen on the basis of political contributions by their law firms, labor unions or corporations.

As a result, said Klayman, "the best and the brightest" do not always make their way onto the bench. At this, Tigar grew visibly angry and shot back that his son, Jon Tigar, also a graduate of Berkeley Law School, was a federal judge.

In its article on Klayman's recommended suspension, the Washington Post observed, that the "conservative" Klayman "is a notably combative litigant whose no-holds-barred tactics and robust use of the Freedom of Information Act have made him a dreaded – and sometimes loathed – inquisitor."

The Post also noted that Klayman writes for "WorldNetDaily, a right-wing news aggregator site." As to the left-wing politics of Fitch and Tigar, the Post predictably made no mention at all and failed to take seriously Klayman's claim that "It was a very politicized hearing committee."

The case itself has little to do with politics. It involves Klayman's pro-bono defense of a female Persian broadcaster at Voice of America. When she did not get the result she wanted, she turned on Klayman.

Both the Florida and Pennsylvania Bars dismissed identical complaints six years earlier. Following Trump's election, the head of the D.C. Bar Disciplinary Counsel resurrected the complaint six years after the woman had abandoned it.

Klayman believes that it was his high-profile legal advocacy on Trump's behalf that awakened legal radicals to the political potential of what is now a 10-year-old case.

"For Tigar, I am a conservative scalp," says Klayman, who is still able to practice law in D.C. during the appeal, "and one that he obviously harbors an animus toward, particularly given my support of Trump." 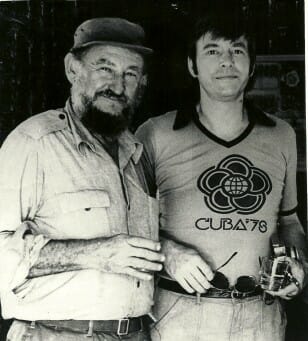 Michael Tigar with Ramon Castro, the oldest of the Castro brothers, in 1978.

The 78-year-old Tigar has been an unapologetic disciple of the hard left from his student days. In his memoir, he boasts of his fond feelings for the brothers Castro and his attendance at the notorious Soviet-sponsored World Festival of Youth and Students in Helsinki in 1962.

Tigar's radicalism alarmed even liberal Supreme Court Chief Justice Earl Warren. According to Tigar, in 1965 Warren ordered Justice William Brennan to fire Tigar, then clerking for Brennan, and Brennan did just that.

Tigar has not mellowed as he has grown older. In fact, he has turned as the larger progressive movement has from defending free speech to suppressing it.

"Of all the remarkable developments of the past decade," argues British author Frank Furedi, "none has been more sinister than the West's gradual surrender of mankind's most important values: the twin ideals of freedom of speech and expression."

In Washington, that "surrender" has been imposed almost exclusively on the political right. Enforcing it are attorneys like Tigar and Fitch, the Democrats in Congress, federal judges of the Jon Tigar mold, and the intel agencies, all with the indispensable support of an increasingly leftist media.

The same Michael Tigar who supported the free speech movement while a law student at Berkeley in the 1960s is now working actively to silence Larry Klayman. It is hard to interpret Tigar's behavior otherwise.

Jack Cashill
Jack Cashill has a Ph.D. from Purdue University in American studies. His lastest book is "Unmasking Obama."
Climate change stuns Rushdie attacker, Hadi Matar
Liz Cheney goes full Orwell in Epps defense
How Wordle got me through the 2022 election
Have we earned the right to be American?
No, the feckless Obama is not pulling Biden's strings
See more...