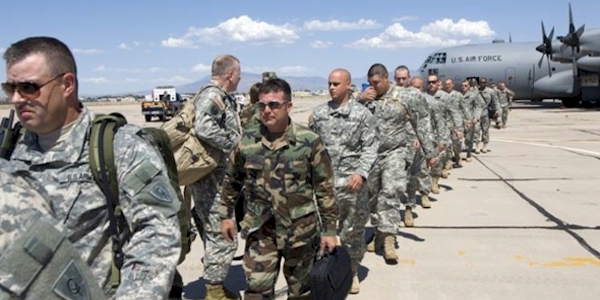 Amid debate in Washington over the president's authority to order military operations against Iran, lawmakers in one state have introduced a bill that would prohibit unconstitutional foreign combat deployments of the state's National Guard troops.

The aim of the bill in the West Virginia House is to restore the Founders' framework for state-federal balance on the Guard, says the Tenth Amendment Center, which supports state's rights.

It states: "The West Virginia National Guard and any member thereof shall not be released from the state into active duty combat unless the United States Congress has passed an official declaration of war or has taken an official action pursuant to Article I, § 8, Clause 15 of the United States Constitution to explicitly call forth the West Virginia National Guard."

The Tenth Amendment Center said the bill would "prohibit unconstitutional foreign combat deployments of the state's national guard troops, effectively restoring the Founders' framework for state-federal balance on the Guard."

House Bill 2732 is supported by a coalition of Republicans and Democrats led by Delegate Pat McGeehan, a Republican from Hancock.

McGeehan served as an Air Force intelligence officer and did tours in Afghanistan and the Middle East.

He said the bill would send a message to Congress.

"It would show the country, the citizens, the people who are actually being represented by the knuckleheads in Washington, D.C., are tired of this war and we're asking them to do something about it," he said. "Reclaim your dang authority. Do your job before you send our sons and daughters, our brothers and sisters, our husbands, fathers and mothers, to go fight in a war that has no national interest – no national security threat."

In Iraq and Afghanistan, about 45% of the troops were Guard and Reserve units. They sustained 18.4% of the casualties.

Neither conflict has been authorized a constitutional declaration of war.

The Constitution authorizes the use of National Guard troops on a national or international scale 1) to execute the laws of the union, 2) to suppress insurrections, and 3) to repel invasions.

"It is this limited Constitutional structure that advocates of the Defend the Guard Act seek to restore," the Tenth Amendment Center said. "That is, use of the Guard for the three expressly delegated purposes in the Constitution, and at other times to remain where the Guard belongs, at home, supporting and protecting their home state."

"For decades, the power of war has long been abused by this supreme executive, and unfortunately our men and women in uniform have been sent off into harm’s way over and over," McGeehan said. "If the U.S. Congress is unwilling to reclaim its constitutional obligation, then the states themselves must act to correct the erosion of constitutional law."