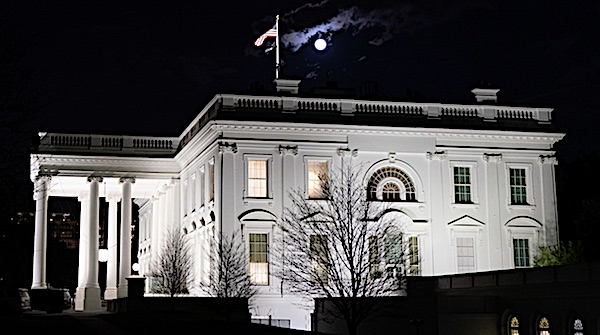 The Full Pink Moon, the largest full moon of 2020, rises above the North Portico of the White House Tuesday, April 7, 2020, in Washington, D.C. (Official White House photo by Tia Dufour)

Sen. Elizabeth Warren, D-Mass., is no longer a candidate for the Democratic presidential nomination, but she's busy championing a vote-by-mail plan for the entire country this fall, calling it an "easy" solution to the restrictions prompted by the coronavirus pandemic.

"A voter gets a ballot with a postage-paid return envelope. They vote, they sign it, and they send it back. It’s easy to vote by mail," Warren said in a video Tuesday.

"And in addition, there should be online registration, extended registration deadlines, and expand early voting to make sure that voting is accessible to all people," she said. "And the federal government should be sending money to the states to make this happen."

Breitbart News noted she is also calling for the use of social distancing to get rid of voter ID laws designed to prevent fraud.

And Warren, speaking on the evening of the Wisconsin presidential primary, said she wants states to stop cleaning voter rolls of ineligible voters, with limited exceptions.

The Wisconsin vote took place after the U.S. Supreme Court, in a 5-4 vote, blocked a court order that extended the period to return absentee ballots.

"The chaos and the attempt to suppress the vote in Wisconsin should be a wake-up call for the United States Congress," Warren said in an interview with NPR. "We need to act immediately."

What’s happening in Wisconsin is a disgrace.

During a pandemic we need voters to stay safe, not be silenced—and one simple way to do that is to allow all Americans to vote by mail, while also enhancing the safety of in-person voting.

"I think if you vote, you should go. Even the concept of early voting is not the greatest, because a lot of things happen," he said.

But he emphasized "there’s a lot of dishonesty going on with mail-in voting, mail-in ballots."

Trump pointed to a Judicial Watch settlement with Los Angeles County requiring the county to remove as many as 1.5 million inactive registrations.