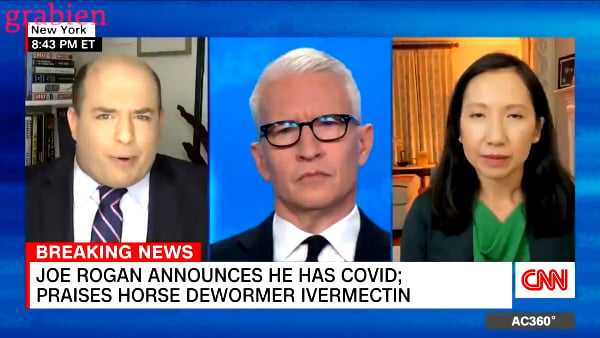 A supercut of various establishment media members disingenuously mocking Joe Rogan for using "horse dewormer" to treat COVID-19 concludes with the top-rated podcaster getting CNN health expert Dr. Sanjay Gupta to admit his network was not portraying the truth.

CNN joined establishment media in ridiculing users of ivermectin, giving the impression that it's only a veterinary medicine and ignoring its documented ability to stop viral replication.

"It's not a mistake. They're unfavorably framing it as a veterinarian medicine," Rogan said to Gupta during a three-hour interview this week.

"They, they shouldn’t have said that," Gupta replied.

After the Rogan interview, as Fox News reported, CNN published a lengthy essay written by Gupta explaining why he believed he need to "go into the lion's den" and appear on "The Joe Rogan Experience."

"The lion ate the doctor and everyone knows it," New York Post columnist Karol Markowicz quipped.

On CNN later that night, Gupta said nothing about his apology during the Rogan interview and even went along with host Don Lemon's denial that CNN lied about Rogan taking horse dewormer.

"That's right," Gupta responded. "It is not approved for COVID and you're right, even the FDA put out a statement saying basically reminding people- it's a strange sort of message FDA, but said ‘You’re not a horse, you're not a cow, stop taking this stuff' is essentially what they said referring to ivermectin. Now, I think Joe's point is that –

"That it's been approved for humans but not necessarily for COVID, right?" Lemon interjected.

"That's correct," Gupta continued. "It's been used for a parasitic disease – it's called river blindness and it's been very effective for that, but, you know, just because it works for one thing doesn't mean it works for something else."

Investigative journalist Glenn Greenwald took note of Gupta's backtrack: "When he had to confront Rogan face to face, he admitted CNN lied about him and shouldn't have said what they said. Then, back on CNN, pressured by Lemon, he stuttered and obfuscated."

"He deserves credit for getting into the ring for three flippin' hours with Rogan, but he wound up battered and bloodied. And if it was a fight, they would've stopped it."