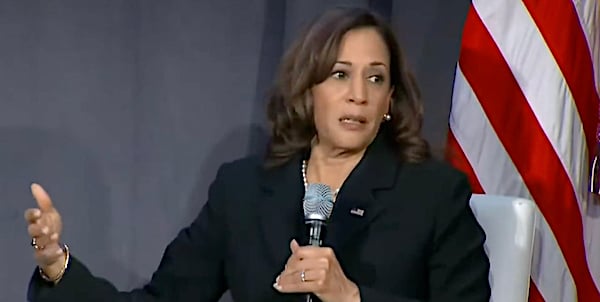 Vice President Kamala Harris declared over the weekend that Hurricane Ian relief efforts in Florida will focus on "giving resources based on equity" to "communities of color."

Asked to comment, the Biden administration's FEMA director, Diane Criswell, acknowledged the challenges those communities face, but she made it clear that the distribution of relief will be color blind.

"We're going to support all communities," she said in an interview Sunday with CBS' "Face the Nation."

"I committed that to the governor," she said, referring to Florida Republican Gov. Ron DeSantis. "I commit to you right here that all Floridians are going to be able to get the help that is available to them through our programs."

While responding to VP Harris’s comments about equity and equality with disaster relief, FEMA head Deanne Criswell acknowledges there are people who have a “hard time” and encounter “barriers” accessing aid, but “our programs support everybody.” pic.twitter.com/pfCW9mn3x4

Harris was at a Democratic National Committee event Friday speaking with actress Priyanka Chopra Jonas when she indicated certain demographics would be given priority.

"It is our lowest-income communities and our communities of color that are most impacted by these extreme conditions and impacted by issues that are not of their own making," Harris told the actress.

"And so we have to address this in a way that is about giving resources based on equity, understanding that we fight for equality but we also need to fight for equity, understanding not everyone starts out at the same place," the vice president said. "And if we want people to be at an equal place, sometimes we have to take into account those disparities and do that work."

The media rapid-response team for DeSantis reacted via Twitter to Harris' remarks.

"FALSE. Under @GovRonDeSantis, Floridians who need help are getting it. FEMA Individual Assistance is available to those impacted by Hurricane Ian regardless of race or background."

FALSE. Under @GovRonDeSantis, Floridians who need help are getting it. FEMA Individual Assistance is available to those impacted by Hurricane Ian regardless of race or background. If you need assistance visit https://t.co/q71f6Flkpl or call 1-800-621-3362pic.twitter.com/AzG3Ax3A6v

Later, Harris ignored a reporter asking, "Could you clarify what you meant about equity for hurricane relief?"

The FEMA director, in the interview with "Face the Nation," prefaced her affirmation that "all communities" would be supported by saying that from her experience with previous disasters, "there are people that often have a hard time accessing our programs, there’s barriers to our program."

"And one of our focus areas, since I've been in office, is to make sure that we're removing those barriers," Criswell continued. "So, these people that need our help the most are going to be able to access the help that we offer. I know that the vice president and the president, they share the same values."