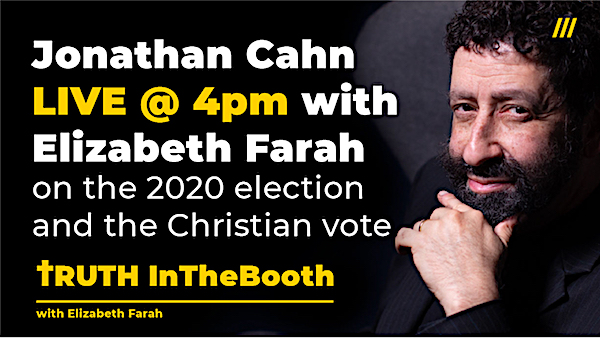 WND co-founder Elizabeth Farah has announced a streaming interview with Jonathan Cahn at 4 p.m Eastern on Monday, to learn more about his call for prayer and fasting on America's Election Day on Tuesday.

The video stream will be posted on WND.com and YouTube.

Cahn, a Messianic rabbi who wrote "The Harbinger" and narrated the "Isaiah 9:10 Judgment" documentary about the spiritual warning from the 9/11 terror attack, is calling on Americans to pray and fast on Election Day, warning the nation is "standing at a crossroad and a precipice," WND reported Friday.

"We are standing at a most critical moment. In a short time, America will be deciding its future. It is undoubtedly the most pivotal election of our lifetime. And never in our lifetime has this nation been as divided as it is now," he says in a video message.

Cahn believes the nation has been given a "window of time" to return to God that could shut and "seal our nation’s departure, its fall, its apostasy – and its progression to judgment." 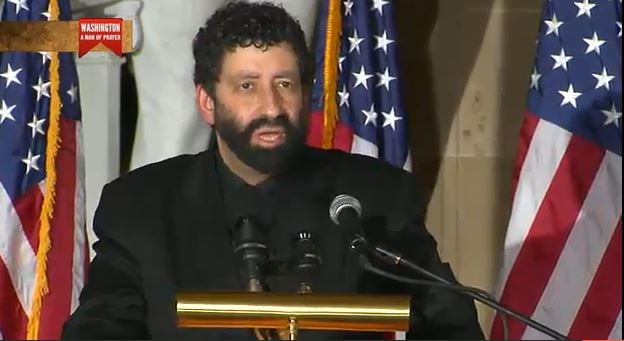 Jonathan Cahn preaches a message at the Capitol. (Video screenshot)

He urges Americans to make Tuesday "God's Day," "The Day of Prayer and Fasting."

"Millions of us joined together on 'The Day of Return' one month ago according to 2 Chronicles 7:14, and in movements of prayer since then," he says in the video. "Let us now commit to seal it all on November 3.

"Spread the word, tell your friends, your pastors, commit that day in your homes, on your jobs, in your churches, your fellowships, to humble ourselves, to pray, to seek His face, and to turn from our evil ways, that He will hear from heaven and answer us."

He says the election is "not about people, personalities, or parties: It's about the issues, and the issues could not be any more clear or stark."

In an interview in September before 'The Return' event in Washington, Cahn pointed to another crucial time in America, during the Civil War, when Abraham Lincoln declared a solemn assembly "and it changed the course of history."