New to this column? Please read this introduction explaining its first-person nature.

Hannah S. and her adoptive parents have the most amazing brief ever filed at the Supreme Court and, appropriate for Christmas week, it is about a "miraculous" conception and birth. They are offering Hannah as living evidence in the case that will abort Roe v. Wade next year, Dobbs v. Jackson Women's Health Organization.

Hannah's life proves that Roe's prohibition of state abortion regulation before "viability outside the womb" (22-24 weeks pregnancy) has been pushed back to the moment of conception/fertilization because she was viable in the petri dish where she was conceived/fertilized (Note that today, science uses "fertilization" rather than "conception").

The 1973 Roe Court identified the defective element in its reasoning that would be used by a future court to overrule its authorization of the mass abortion-homicide of 63 million innocent preborn lives:

"The appellee [Wade] and certain amici argue that the fetus is a 'person' within the language and meaning of the Fourteenth Amendment. In support of this, they outline at length and in detail the well known facts of fetal development. If this suggestion of personhood is established, the appellant's case [Roe], of course, collapses, for the fetus' right to life would then be guaranteed specifically by the Amendment." [Emphasis and bracketed comments added. Roe at pages 156-157.]

Hannah's "friend of the court" amicus brief in Dobbs explains why the evidence of her life aborts Roe's viability rule:

"Amicus Hannah began her life through in vitro fertilization. She was formed outside her genetic mother's womb and was sustained there, in a frozen state, for over two years. Amicus Hannah was a human being from the time of fertilization.

"Amicus Hannah's parents are John and Marlene S. They were the first couple to 'adopt' a human frozen embryo as their child, that is, Amicus Marlene was the first woman to have an 'adopted' embryo, frozen shortly after fertilization, placed in her womb." (Page 1-2)

"The story of this 'adoption' and this Amici Curiae Brief will reveal that Roe's measuring line for viability has now been moved all the way back to fertilization by the modern scientific advancement called in vitro fertilization. Roe, at 160, has this viability definition: 'viable,' … potentially able to live outside the mother's womb, albeit with artificial aid.'

"Advances in science have eliminated the distinction between previability and viability. Previability prohibitions on elective abortions should be constitutional because viability occurs at fertilization, as proven through in vitro fertilization techniques." (Page 2, emphasis in original)

"In vitro fertilization, non-existent at the time of the Roe decision, is defined by Webster as: 'fertilization of an egg in a laboratory dish or test tube; specifically: fertilization by mixing sperm with eggs surgically removed from an ovary followed by uterine implantation of one or more of the resulting fertilized eggs.' … The frozen embryo lives outside his or her mother's womb, 'albeit with artificial aid,' Roe at 160, which is part of the scientific advancement of 'man's knowledge.' Roe at 159. Amicus Hannah's life is proof-positive of this fact." (Page 3-4)

On pages 8-9 are the most amazing photos of "Hannah and two siblings "viable outside the womb" as fertilized eggs: 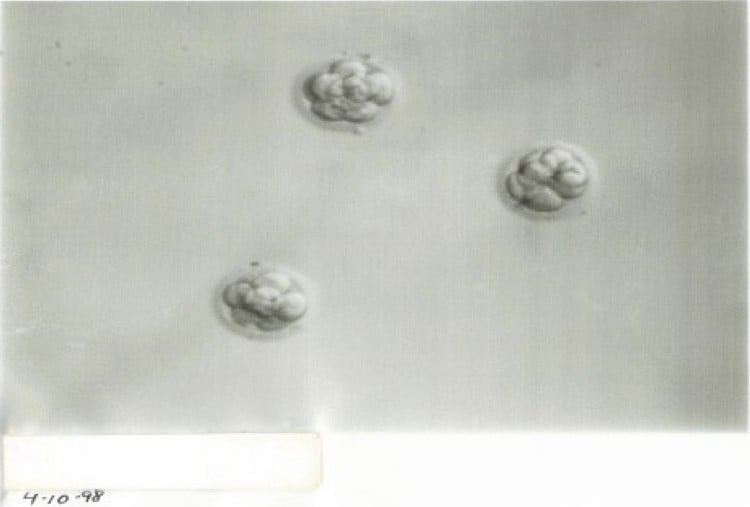 Hannah and 2 siblings viable outside the womb, day of thaw.

"These embryonic photos are actual photos of Amicus Hannah, as an embryo, not ultrasounds. It is unknown which of the three embryos in the photos is Hannah. The first photo was taken on the day of the thaw, the second photo was taken the following day, before the transfer to Amicus Marlene's womb. Of note in looking closely at the photos is that overnight, in a petri dish, the embryos advanced to their next stage of development. This is called 'compaction,' when the cells start to move to one side and a fluid-filled sac is forming. This is a complete human life growing on its own. Not 'a clump of cells,' as abortion proponents frequently call embryos." 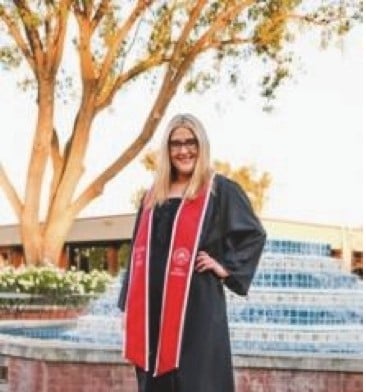 On page 19, under a photo of Amicus Hannah at her college graduation, her brief states:

"Like The Emperor Has No Clothes, it is time to admit life does begin at fertilization. Unlike the folktale, this is no laughing matter. It is logically evident that life begins at fertilization, as the example of Amicus Hannah clearly demonstrates. There is really no need to make something that is so simple complicated.

"You see, a human is a human no matter how small.

"A human is a human no matter which side of the uterine wall [Dr. Seuss footnote omitted].

"It is truly an illusion to say that we cannot determine when life begins – it begins at the beginning." (Page 19, first emphasis in original, the second and the bracketed comments added.)

How simple, logical and profoundly meaningful is that most obvious scientific truth for all of us preborn Americans? Get ready for the blessed overturning of Roe v. Wade.

From the conclusion of Amicus Hannah's brief:

"It is time [for this Court] to get out of the business of forcing Americans, in every state, to pretend that the emperor has clothes – that abortion is okay because some people don't want to admit the obvious, that abortion is infanticide. Many, many Americans already believe that life begins at fertilization. Science proves it is true. The life of Amicus Hannah proves it is true." (Emphasis and bracketed comment added.)

If the Dobbs Court acknowledges the scientific and logical facts presented in the brief of Amicus Hannah – that life "begins at the beginning" and, therefore, so does constitutional "personhood" – then it will overturn Roe next year and rule that preborn lives are constitutional "persons" from fertilization within the meaning of the 14th Amendment – deserving of our lives being protected in every state! If the Dobbs Court does that, The Great American Abortion Holocaust will finally come to an end. Praise God!

PreBorn Americans United want readers to understand why the Supreme Court will overturn Roe v. Wade in 2022 using Dobbs v. Jackson Women's Health Organization, and why we demand Nuremberg-style trials to bring to justice the pro-abortion leaders and doctors responsible for the slaughter of our 63 million innocent brothers and sisters.

Please share this column with your friends on both sides of this most important issue as well as on social, print and broadcast media (past columns are linked below).

And please consider supporting this effort with your greatly appreciated tax-deductible donations to bring you future columns 1) explaining A Declaration of Human and Constitutional Rights by PreBorn Americans, 2) analyzing and reporting on the 138 briefs filed in Dobbs (some 5,000 to 12,000 words), and 3) reporting on the oral arguments and the decision in the Dobbs case. Donation details here.