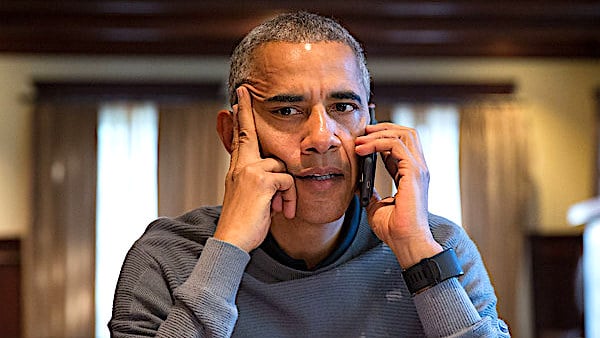 President Barack Obama talks on the phone with FEMA Administrator Craig Fugate to receive an update on Hurricane Matthew, Oct. 8, 2016. The president spoke from his home in Chicago, Illinois. (Official White House photo by Pete Souza)

Ever since Barack Obama's recent visit to the White House in which he was given the star treatment while Joe Biden was seemingly ignored as he wandered aimlessly, there has been talk that Biden's presidency is over and that Obama himself could slither his way back into the Oval Office.

Although the 22nd Amendment precludes Obama from being "elected to the office," a self-admitted "wild theory" proffered at American Thinker could have him regaining the presidency by another legal route.

"Obama's aiming to get back into the Oval Office," asserts Andrea Widburg.

"My premise is that Obama fully understands that, if Biden is ousted immediately under the 25th Amendment, there are only idiots and incompetents to take his place.

Obama came to the White House today, immediately got mobbed, and no one wanted to talk to Biden. pic.twitter.com/69B2H92XVV

"If it's not Kamala Harris, then it's Nancy Pelosi and, if not her, then Patrick Leahy, Antony Blinken, Janet Yellen, Lloyd Austin, Merrick Garland ... Obama knows none of these nonentities will secure the transformation he promised America. Instead, there are three steps to return Obama to the presidency:

"1. Have the Democrat establishment remove Kamala Harris from office, whether through threats or bribes.

"2. Have the Democrats declare that, because world instability (Ukraine, Putin, China) puts us at unprecedented risk, only a politically seasoned person can be vice president, with Obama graciously accepting that role.

"3. Oust Biden using the 25th Amendment. And voilà! President Obama (again). He can even have Stacey Abrams as his veep.

Widburg notes: "Obama will then have two and a half years to lock down America's 'fundamental transformation' into a fully socialized third-world country, and Biden has given him a head start when it comes to destroying institutions. Heck, if Obama does the job right, he can be the new Putin or Erdoğan: America's president for life.

"And yes, I agree this sounds crazy, but events since 2020 show that we really are nothing more than a fancy banana republic."

Does Biden now regret inviting Obama to the White House?pic.twitter.com/E0FvZxAgvq

Widburg says Obama "is probably the one running the White House show" at the present time, and he "has signaled that Biden's presidency is over, making Biden toxic."

She also claimed "Kamala Harris still thinks she has a shot at the presidency when (not if) Biden is removed. She was auditioning hard for the job, trying to show Obama that she'll do better than Biden at preserving and expanding the hard-left Obama legacy. 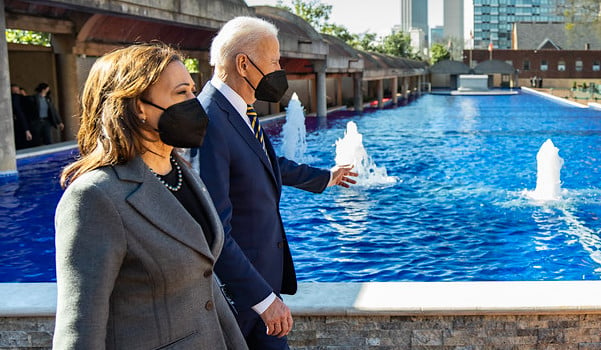 "However, Obama, who is an extremely smart politician, despite his ignorance and broken, Marxist moral compass, knows that Kamala is as bad as, or even worse than, Biden."

WND columnist Jim Darlington took note of Widburg's column, and opined: "Such could be the plan or just the stuff of fanciful leftist wishes. Of course, it also evokes conservatives' darkest nightmares."

"But perhaps the time has come to wonder. In these days, nothing that happens is what is generally expected, and each new outrage outstrips the one before it."